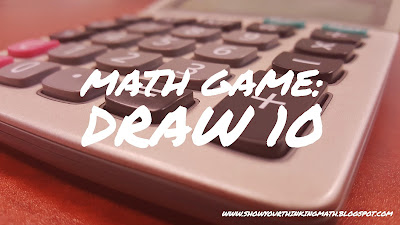 There are days leading up to break when you want to do something:
1. "mathy"
2. low-tech
3. fun
4. engaging that will keep everyone's attention!

It's that time of year when teachers need a math game idea. My post about activities to do the last weeks of school is one of my most viewed because of this exact thing.

I wrote about this game, "Draw 10", in the post I mentioned above, but I don't think it got much attention, probably because I didn't explain it well or give examples of how it will look as you play it, so I wanted to fix that. This game is fun for grade levels 3-12. With younger kids you will want to play the whole numbers version, while older students will be more challenged by the decimal version. ((Speaking of older kids, it would be really interesting if someone adapted this into another base besides base-10!))

To play Draw 10 you will need:

1. The game boards printed for your students. I usually try to fit quite a few on one piece of paper so you can play several rounds.

2. A way to choose numbers 1-9. Ideas for this are playing cards 1-9, index cards with numbers 1-9, or a random number generator app/website on your phone, tablet, or computer.

Basic Rules:
Each student uses a new table each game. Before you begin, you set a goal. For example, "1000." You draw a card from the pile and announce it to the class. Let's say you draw a 6. Students can either record the value in the hundreds, tens, or ones column (600, 60, or 6) and put the total on the right. You have to play that number at that time. The number 6 goes back into the pile- every number has an equal chance of occurring each round (students often think if a 6 has been drawn, it is unlikely to be drawn again-- nice chance to talk about probability!) Next round, draw another card. Students choose a column and record, adding that value to the previous total. You can't go back and chance any values and you must play all 10 rounds (even if you have already met the goal). Also, each student might choose a different column, so their totals are different. At the end, whoever is closest to the "goal" wins.

The next draw might be "4." Here Student A chooses to make that worth 400. They put their current total as 430, which is adding the values from round 1 and 2.

Here is an example of a different student (Student B) playing the same game. They choose to put both rounds in the 100's place, so their total is 700 instead of 430.

Here are what the game board might look like after you play all 10 rounds. Remember, students must play all 10 rounds even if they go over the goal. Also, you have to play each round at the time the number is called (you can't go back and changed previous rounds).

Student B wins because they are closest to the goal of 1000.

How it might look to play with the decimals:

Goal is set at 3.
Student A

Student A wins because they are only .15 away from the goal. I like to play that it is okay to be over or under, just whoever is closest to the goal wins. (this gives an opportunity to connect to absolute value)

Ideas and modifications to consider or try:
1. Let all or some students use a calculator
2. Experiement with different goals. What does a really large goal do to game play? How about really small?
3. Let students "go back" and change one value they regret
4. Let students work in partners
5. Play as a station game instead of as a class
6. Play this game at another time of year, maybe when discussing place value!
7. Use this game to talk about some other math topics that come up during play such as probability and absolute value (distance to goal number).
8. Have students discuss in groups or class their strategies.

I want to mention that, as all good teachers do, I totally borrowed this game idea from another teacher-- and perhaps she got it from another source, too. About 10 years ago, NCTM had a regional conference in Chicago. I tried looking up the year, but the NCTM website doesn't have info back that far on their conference page. I wanted to go, so I paid my own way and took a personal day from school and attended. I went to a session by a teacher that showed us this game! She had us play as a group and gave us a packet with a copy of the chart used to play. I have since lost track of that original packet and have no idea the name of the teacher presenting. Was it you? Someone you know? Let me know so I can give you credit!
classroom management community in the classroom cooperative learning lesson plan

Popular posts from this blog 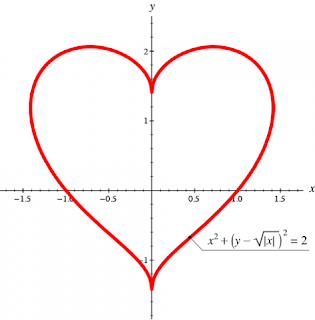 If you teach middle school, brace yourself for the craziness that is Valentine's Day celebrated at school tomorrow! Heart shaped suckers, teddy bears, chocolate, and a few (hopefully minimal) tears. Instead of fighting it, embrace the mathiness that can be squeezed out of this heart-filled holiday! Here are a few resources to use: 1. Send a Math-o-Gram . Love math? Love Desmos? You can send your students (or friends) a heart themed graph! 2. Make a Mathy Valentine Use transformations to rotate your way to your students' hearts. 3. Check out these other heart-shaped graphing activities I found these NCTM Illuuminations graphing actives a few years ago. 4. Graph this equation in Desmos : (this was a fun one for my 6th graders... just to figure out how to type in the correct symbols!) 5. Mobius Strip Hearts ?! Yes! Happy Valentine's Day! <3 Update: More Valentine's Day Activities Added: Early Childhood Ideas: Spark a Lov
Read more 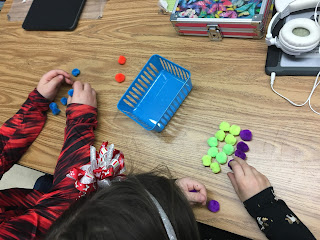 I LOVE COUNTING COLLECTIONS! I can't believe I didn't know about them before, but after watching an ICTM webinar by Denise Brown ( check out the recording here !), I was hooked! Immediately, I reached out to a few teachers in my district that also watched the webinar. I co-taught a counting collections lesson in each of their classrooms, one kindergarten and the other 1st grade. Wow. It was amazing. Then, I saw another ICTM webinar by Kassia Wedekind ( see that one here !) where she talked about nudges during counting collections. Ah ha! Another amazing idea. Now I wanted to try more counting collections lessons. Luckily, we had a teacher institute day coming up and one of the original counting collections teachers agreed to present the idea to all of the kindergarten and 1st grade teachers. She did an awesome job sharing how she was using the routine in her classroom. Next, I put together a traveling "Counting Collection Collection." I went to the dollar
Read more 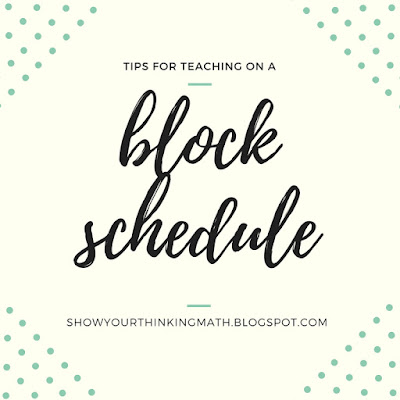 I had an opportunity to teach on a 45-minute traditional class period schedule and a 90-minute block. Both models have their pros and cons. I think my own preference is block schedules because you have so much more time to dive into content. There are fewer transitions and it just seems calmer and more conducive to learning. However, one major challenge is finding purposeful ways to fill that block. If you notice that you are doing one activity for a long period of time, it might be important to think about chunking. What I mean by chunking is thinking of you period in 15-20 minute chunks of time and planning activities within those chunks. I find it's difficult to keep students attention if something lasts longer than 20 minutes, so that was my maximum for any activity (except an assessment). I developed the following sample block plans based on 85 minutes. So, if you have 60 minutes you can think about cutting out one of these pieces. If you teach 90 minutes, add 5 minute
Read more